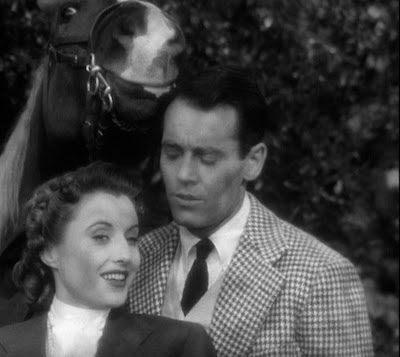 Horse horning in on the action.
"I need him like the axe needs the turkey!"

It's an odd take on life where the ideal man is an awkward doofus who doesn't twig on to the most obvious things, but if you can get past that then The Lady Eve is goddamn hilarious. I'm not sure how they got this all past the censors. Stanwyck plays a card sharp who bilks rich fellows for their money but ends up falling for Fonda, the beer (ale?) heir. Hijinks ensue.
Posted by Peresblancs at 9:05 PM No comments: 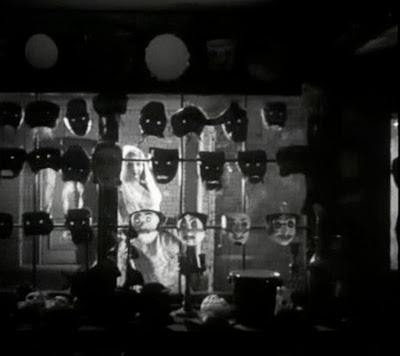 "It is written!" shouts a hostess of a dinner party after the evening's entertainment, a palm-reader, announces that one of her guests will soon marry. Reminds me of Lawrence of Arabia. The characters in this film waver between feeling bound by immovable circumstances and questioning whether they can willingly change their futures. Of the three stories, the best-known is the middle sequence in which Edward G Robinson is haunted by the palmist's prediction that he will commit murder. I enjoyed the third: a high-wire artist dreams he falls to his death, and he struggles to overcome the feeling that the dream was a warning.

The imagery of the masks in the first sequence (above) are wonderful - reminded me of James Ensor's work. 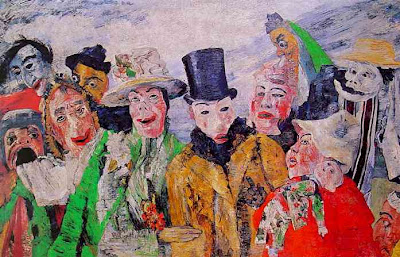 Posted by Peresblancs at 6:14 PM No comments: 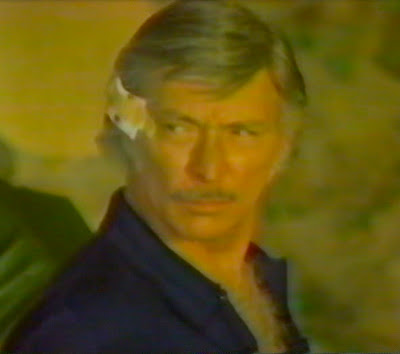 A fifteen-year hunt for this, which - YAHOO! - has resulted in getting my hands on a crummy bootleg copy with Spanish subtitles probably sounds like mental illness but low-budget Italian crime flicks have a special place in my heart. Two years ago I thought I finally had this film, but The Lee Van Cleef Collection issued by St-Clair Visions that claimed to include it turned out to be only some kind of cruel fake-out. Damn you once again, St-Clair Visions!

There's a few things I love about this genre. There's the strange pace: quick edits to fast action alongside dawdling pauses as little interludes of nothing are filmed. The music is fantastic. And completely bizarre scenes (let's talk about the bird collector in Quel Pomeriggio). The credits claim Richard Widmark is a co-star of Lee Van Cleef - oh wait, that's ROBERT Widmark (!) ... Although these flicks get brutalized by most critics, I think the dialogue and action scenes are just fine, better than most multi-million dollar movies. Personally, I think Van Cleef had it figured: hang out, make movies along the Costa Brava... doesn't sound so bad if you ask me. 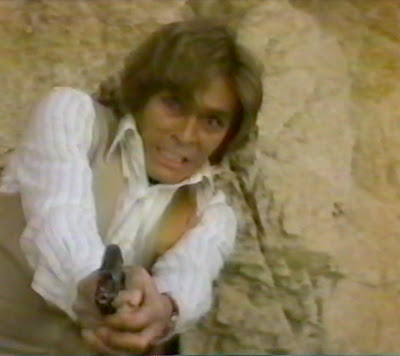 Posted by Peresblancs at 3:39 PM No comments:

I really hate this clichéd mise-en-scene. George Kennedy gets rejected.

This movie deserves to have its exclamation mark revoked. While the late 60s saw directors playing with the genre, whether blowing it into operatic artiness like Leone's Once Upon a Time in the West, (1968) or satirizing it like Burt Kennedy's Support Your Local Sheriff! (1969), McLagen decided to plod on unimaginatively. Two massive stars would save it, right? Dean Martin and James Stewart play brothers (yeah, I would like to know who approved that casting decision). Worse, each scene with the two is lifeless and annoying. Stewart is a moralizing wet blanket and Dean fades into nothingness. We don't even get a song out of Deano!

What is it with mid-60s period movies and the women's costuming? Were women just so unable to live without their false eyelashes? Raquel Welch must have been smuggling something under that ridiculous mane of wig mixture.

I continue to be baffled by the crappiness of this film and need to get my complaints off my chest. Here are a couple more from my checklist: scenes are littered with completely idiotic dialogue with stinkers like, "I didn't do it, he did. But if he hadn't, I would have." And: "I haven't been to Mexico since I left." Finally, I can't believe not even one Bandolero gets a mention in the final credits, not even El Rapeo!

Claps to my significant other who calls out George Kennedy within first few seconds of the film - just having seen the back of the man's head!

Posted by Peresblancs at 10:00 PM No comments:

Great story that involves multiple costume changes (gypsy! monk! royalty!) for Vincent Price, giving this little B-movie just enough theatricality to compete with his later horror roles. Conventionally told story based in historical fact about a man who forges historical documents to substantiate his claim that he is heir to all of Arizona Territory. Price is just amazing as loathsome character who is completely obsessed with his crazy plan. He goes so far as to find an impoverished orphaned child, claim she is a descendant of the heir to the territory and then, creepily, marries her to seal his right to the land while her adoptive father shivers in disgust. Price hovers a head taller over everyone, bringing a kind of strange physicality into the performance. Ellen Drew, playing his virtuous wife, is a great counterpoint.

I don't know what was more awesome: the tacky, giant map of Arizona in his office or how the pug-ugly local hicks were all outraged about Price's fraudulent land claims when obviously they were all recent arrivals who had just finagled land away from the Indians. What a great American story!
Posted by Peresblancs at 10:29 AM No comments: 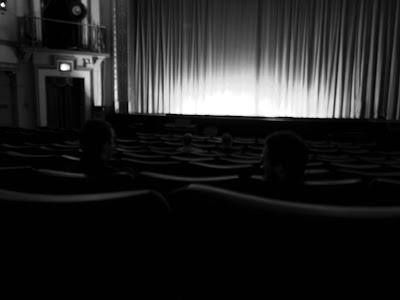 In her essay "Movies on Television," Kael bemoans the situation of those of us too young to see great movies the moment they came out. How unfortunate, we have to see them on television: "all jumbled together, out of historical sequence. Even what may deserve an honorable position in movie history is somehow dishonored by being so available, so meaninglessly present. Everything is in hopeless disorder." A criticism of how movies looked, chopped up & made to fit TV, this essay also emphasizes the social nature of movies: they are participatory, an event, something done en masse in public, at night... well, sometimes. I certainly realize I have missed these films as social events and will never have that experience. Religiously attending my local rep will not make up for that, seeing flicks in the disgusting local multiplex won't either. Most of what I see I do see in my living room.

Kiss Kiss Bang Bang is the second collection of Kael's writings and contains reviews of films that were produced close to the time of publication, essays on the careers of those in the industry and reviews of films that were produced during the studio era. Kael's writing was pretty unflinching. Take her piece on Stanley Kramer, best known for Guess Who's Coming for Dinner. Right off the bat she compares him with a salesman who used to hang around the coffeehouses on campus, took a psych test and discovered that "he was a phenomenon, according to the testing centre, because of the enormous discrepancy between his abilities and his professional and artistic aspirations." Ouch! She brings herself into the writing frequently (or her lived experiences) and focuses on circumstances behind a production, the role of a producer or the work of a cameraman, as much as she does the stars.

Movie criticism would not strike me as a genre with much longevity, but the quality of Kael's writing belies this. I was surprised how few of the films I had heard of (often Italian or Japanese) which she considered to be highly influential of American directors in the 60s. Some of her writing is surprisingly prescient; other films which she dismissed have gained a foothold over time. One of these I would say is A Man for All Seasons; Kael describes the titular character (Sir Thomas More) as not "particularly relevant to this season, I doubt he's relevant to any season." When I re-watched this one on television recently, I could only draw a straight line from that film's antagonist's abuse of power and disregard for established law to Bush 47's disregard for habeus corpus, etc.

Kael claims that because of television there really is no natural selection process for movies (unlike other arts) but this is where she and I would part ways; for Kael, a good movie is a good movie but the rest is detritus "what does not deserve to last, lasts," she writes, "and so it begins to seem one big pile of junk." So, Kael may be the only writer I have ever read who actually celebrates that only a small percentage of other, earlier art forms have survived!
Posted by Peresblancs at 5:37 PM No comments: